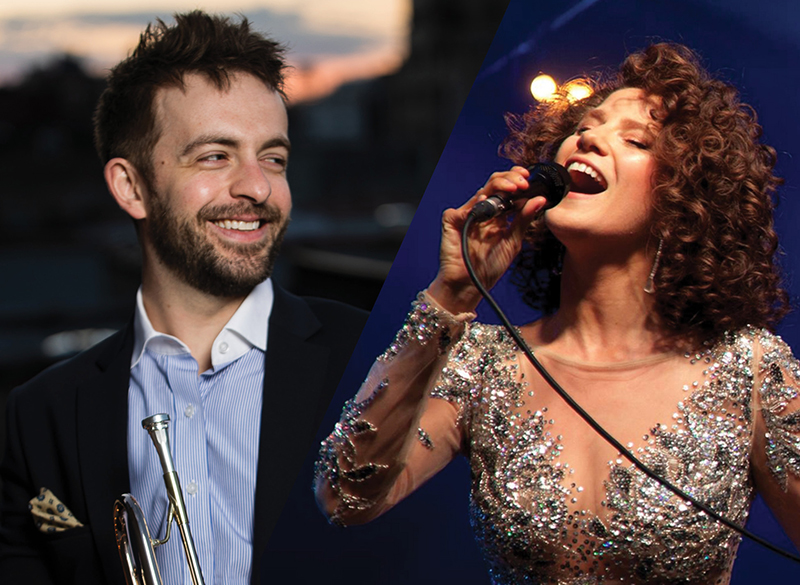 Benny Benack is a 3rd generation Jazz Musician out of Pittsburgh. And at age 30, he is a trumpeter, singer & something of a rare talent…he’s an incredibly engaging entertainer & improv artist. Exhibiting fiery trumpet playing with “a stirring command of the postbop trumpet vernacular in the vein of Kenny Dorham and Blue Mitchell”, Benny is also a singer with a sly, mature, naturally expressive delivery in the post-Sinatra mold, performing standards and his own astute songs with a thrilling sense of showmanship. And he’s a highly capable pianist as well.

As a 2014 finalist in the Thelonious Monk International Jazz Trumpet Competition, and winner of the 2011 Carmine Caruso International Trumpet Competition….Benack is highly sought after as a clinician and educator, leading workshops for Jazz at Lincoln Center’s Jazz for Young People program, as well as the New York Youth Symphony’s Education department.

BUT WAIT!!!…There’s more!!! Joining Benny to put the cherry on top of this luscious evening of Live Jazz….will be the trés chic, beautifully gifted Songstress…Miss Cyrille Aimée!

Improvisation is not just a technique for Grammy Nominated Artist Cyrille Aimée, it’s a way of life, one that has not only allowed her to share her engaging voice and sparkling creativity with the world, but has led her on an unexpected journey.

Aimée has ventured from singing on street corners in Europe to dazzling audiences at some of the world’s most prestigious jazz festivals. She’s gone from sneaking out to sing in gypsy encampments in her native France to acting on Broadway; from braving the notoriously tough audiences at New York’s Apollo Theatre to being hailed by The Wall Street Journal as “one of the most promising jazz singers of her generation” and called a “rising star in the galaxy of jazz singers” by the New York Times.

She spent her teen years performing in the cafés and clubs of Paris, then attended the American School of Modern Music there. She garnered her first taste of notoriety – when she was selected as one of 16 semi-finalists for Star Academy, the French equivalent of American Idol. Realizing how restrictive the show’s contract would be, however, she opted to walk away & ignited a scandal in the French media.

Aimée escaped that spotlight, but was soon drawn to the U.S., where she attended SUNY Purchase on scholarship – in large part due to its proximity to the jazz hub of Manhattan. She honed her skills through weekly gigs at a Soho restaurant and at Birdland Jazz Club; during that time she also became a regular at Smalls Jazz Club in Greenwich Village.

Returning to Europe & the famed Montreux Jazz Festival in 2007, Aimée entered and won the vocal competition, recording her debut album with the prize money. It was the first of many such accolades to come, including winning the Sarah Vaughan International Jazz Vocal Competition and becoming a finalist in the Thelonious Monk Jazz Vocal Competition as well as the TV5MONDE series Talent Acoustic.

Cyrille recently released her tenth album titled, “I’ll Be Seeing You”, with longtime collaborator, guitarist Michael Valeanu. Her range of styles encompassed in this catalogue of musical works by this young French Jazz Vocalist is impressive….ranging from New Orleans Jazz, to an album of Stephen Sondheim compositions, from Gypsy Jazz to Straight Ahead Jazz with the likes of Roy Hargrove & pianist ( & owner of Small’s Jazz Club in NYC) Spike Wilner.